The city of Edfu is situated in Upper Egypt, about 100 km south of Luxor on the west bank of the Nile. It is famous for its large temple from the Ptolemaic age (about 300-30 BC) that is dedicated to the falcon-headed god Horus. It is one of the most impressive sacred buildings in Egypt and is considered to be the best preserved temple of antiquity.

Regarding amount and content, the inscriptions that cover the walls of the Temple of Edfu are among the most important sources on Ptolemaic Egypt. They offer a wealth of information, mainly about religion, but also about political history, administration and other topics. Since some of the Edfu inscriptions transmit ideas that come from the eldest epochs of pharaonic history, they are often consulted as an aid in understanding older sources. Thus, religious concepts of pharaonic Egypt cannot be properly understood without interpreting the texts of Edfu. As a whole, the Edfu inscriptions can be taken as a compendium of Egyptian religious thought.

After the French egyptologist Auguste Mariette (1821-1881) had cleared the Edfu temple of sand and debris (until 1867), research on the texts and the decoration of the temple walls started immediately. Soon afterwards, some major texts were published by various scholars (E. von Bergmann, H. Brugsch, J. Dümichen, E. Naville, K. Piehl and J. de Rougé). A high rate of mistakes, or rather, the inaccuracy of these early copies is due to the bad working conditions of that time: Early egyptologists had to cope with dirt from bat excrements and wasps’ nests, bad accomodation and the lack of technical equipment and interior lighting.

The Texts: 3.000 pages of hieroglyphs

The French egyptologist Emile Chassinat (1868-1948) laid the first reliable foundations for future research on the Edfu texts when he copied and published all inscriptions and scenes from the temple walls. It took him forty years. His work consists of fourteen volumes, among them eight volumes of 3.000 pages of hieroglyphical texts, two volumes of sketches and four volumes of partly excellent photographs.

Between 1984 and 1990, Silvie Cauville und Didier Devauchelle published a revised edition of the first two volumes and edited a 15th volume that compiles texts and images that had been overlooked. Despite Chassinat's excellent publication, however, up to the 1970ies only 10 to 15% of the Edfu inscriptions had been translated into different languages and had been worked on with varying degrees of accuracy.

The Edfu texts had been published for decades before they were worked on adequately. Because of the extraordinarily large amount of texts, most linguistic and factual problems could be solved by searching the rest of the material for comparable cases.
In 1986, Professor Dr. Dieter Kurth of Hamburg University initiated a long-term project that is devoted to a complete translation of the Edfu inscriptions that meets the requirement of both linguistics and literary studies.

It was triggered by the frustrating experience that parallel passages and comparable contents were nearly lost among those 3.000 pages of hieroglyphs if researchers did not start to search every single page afresh when they came across a problem.
In a way, this meant that researchers always had to start from scratch if they attempted to further our knowledge of the Edfu texts.

The Edfu project's goal is to provide a reliable translation of all temple inscriptions. In addition, the research comprises all internal parallels, relevant literature and an analysis of the systematics behind the decoration. Comprehensive analytical indices – which are useful for researchers of related disciplines – and a grammar of Graeco-Roman temple inscriptions are compiled, too. Situated at the University of Hamburg, the Edfu project was financed by the "German Research Foundation" until 2001.

Since 2002, the Academy of Sciences of Göttingen is in charge of the Edfu project, which is now financed by the "Academies' Programme". The research unit works still at HamburgUniversity.

What Emile Chassinat has accomplished with only a small number of technical devices is admirable. His copies surpass by far the work of his predecessors. When all available photographs were compared with the Chassinat's texts, it became clear, however, that his publications contain more mistakes than expected. Many of them prevented researchers from translating and actually comprehending the meaning of the texts. So, it was necessary to compare the texts published with the original inscriptions at the Temple of Edfu again to get a reliable basis for further research.

During eight epigraphic research trips between 1995 and 2011, the entire volume VIII and selected passages of the volumes Edfou IV-VII were compared with the original inscriptions.

Hieroglyphic signs and text passages of Chassinat’s publications had to be corrected or supplemented especially if the inscriptions are on rather inaccessible or damaged parts of the wall.
The first volume of translated texts (Edfou VIII) comprises 40 pages of corrected hieroglyphs, the second volume (Edfou VII) 48 pages. A volume of line drawings of Edfou VII, which Emile Chassinat had planned but never compiled, was released in 2009. Furthermore a grammar of temple inscriptions from the Graeco-Roman period that includes the writing system, the phonetics and a comprehensive sign-list has recently been published.

The major part of the temple decoration consists of ritual scenes in which the king and various gods face each other. Form and content fit into different contexts and the king's offering or action corresponds to a specific religious request. This is well illustrated by the following scene entitled "To let the sistrum shine forth". 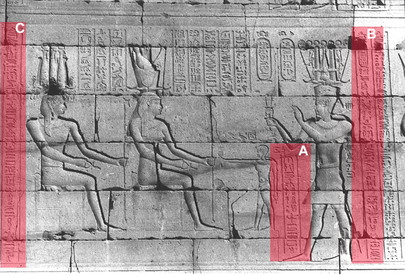 The king speaks (A):
"Thy sistrum for thee, thou Mighty one with the great flame, Shining one, the (sistrum, which) will quench your ire."
The king’s verbalized wish to pacify the enraged goddess (Hathor) is described further in the royal column (B):
"... Ptol. IX. ..., he grasps the naos sistrum, seizes the arch sistrum and dispells the anger of the Eye-of-Re (Hathor). He is like the musician of the Golden one, ..., who plays the sistrum for his mother to her heart’s desire."
During the service the priest used a sistrum (rattle).
The divine column describes the success of the ritual (C):
"Behedetit (the goddess of Edfu) has appeared in Behedet (Edfu) ..., she restrains her wrath, becomes full of joy again and expells her majesty’s raging. She is the Mistress-of-joy as soon as she beholds the sistrum, the Splendid one who loves music."